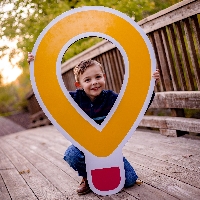 This year, Benjamin is turning 5! We are continuing our tradition and set our goal of Ben's age x $1,000.

Here is his story:

We never imagined Benjamin’s first car ride would be in a Life Lion pediatric ambulance on his way to Penn State Children’s Hospital to receive the specialty care that would ultimately save his life.

At just 48 hours old, with under-developed lungs, Benjamin needed to be transported to a higher-level NICU that had the necessary equipment to help him breath and allow his lungs to heal. I (Dani) remember sitting in the back of the ambulance next to Benjamin’s life-sustaining isolette with Nate following closely behind in our car, asking myself, “is this really happening”?

This is the type of thing they don’t prepare you for when taking those childbirth and parenting classes. After a completely normal pregnancy, with no issues, to say Benjamin’s arrival a month early was unexpected is an understatement.

As soon as we arrived at the hospital, the doctors and nurses moved quickly. I remember watching as they whisked Benjamin into a critical care room in the NICU, a flurry of activity as they examined Benjamin and got him hooked up to a high oscillating ventilator that would serve as his life support for the next week. Again, another surreal moment as I watched all this happening from behind the doors, still holding the cooler that contained the breast milk I had pumped for him earlier that day.

Once Nate parked the car and met me in the NICU, we waited for what seemed like an eternity, wondering what the doctors were going to say about Benjamin’s condition and his prognosis. Before we left for Penn State Children’s Hospital, a NICU nurse told us, “Your baby is very sick,” clearly not something you want to hear, especially as first-time parents, but a reality check as to the severity of Benjamin’s condition.

As soon as were able to see Benjamin, we were taken aback by all the wires and tubes hooked up to our precious little boy. We talked to the lead neonatologist who tried to explain in the most basic of terms what was happening with our son and their treatment plan. Within minutes, I was signing consent to put Benjamin on ECMO, a heart and lung bypass machine, in the event his condition worsened overnight, and they needed to move quickly in that direction. Thankfully, it was something Benjamin would not need during his stay in the NICU, but we are ever so grateful it was there and available to Ben should he have needed it.

As the days moved on, Benjamin’s condition improved, despite a few setbacks along the way. We spent most of our days at Benjamin’s bedside, watching him fight for his life and grow stronger each day. We gathered with family and friends in the Ronald McDonald House Family Room outside the NICU. This AMAZING support network of people visited, prayed, cried and laughed with us, and brought us meals to help us keep up our strength to keep facing each day of Benjamin's NICU journey.

After three weeks in the NICU, Benjamin was finally able to take that first car ride we thought he was going to take after he was born – the car ride that brought him home with us. Of all the car rides we have taken since, that one by far holds the most meaning to us.

From the day we brought Benjamin home, he has been the light of our lives, bringing us and so many around him incredible joy and showing us a deeper love than we could have ever imagined. When he smiles, he just lights up a room and his laughter is contagious.

His 5th birthday is in a few days, and our hearts are full. Our energetic and inquisitive little boy loves baseball, trains, astronauts and outer space, reading books, riding his bike (now, without training wheels - something he mastered this past year), building marble tracks (building anything, really), mini-golf, fishing (another new thing he started doing this year), and spending time with his family and friends. And, he's off to Kindergarten this fall! Wow, so many amazing things to celebrate this year!

Here’s the thing about our experience and so many others' – you just never know what life is going to throw your way – and we are so incredibly thankful to Penn State Children’s Hospital and the Children’s Miracle Network (CMN) Hershey for giving our Benjamin the Gift of Growing Up.

CMN Hershey expects the unexpected, raising money for and providing the necessary equipment and services needed by so many children. While Benjamin’s stay in the NICU was brief, we are thankful for the monies raised by CMN to purchase the pediatric Life Lion ambulance and isolette Benjamin was transported in to the Penn State Children's Hospital, and thankful that the ECMO machine, another piece of equipment purchased through the monies raised by CMN, was available should Benjamin have needed it.

We are humble and grateful for all of the support for Benjamin and our family over the years, and for the continued support of CMN Hershey and its mission.

Much love and gratitude,